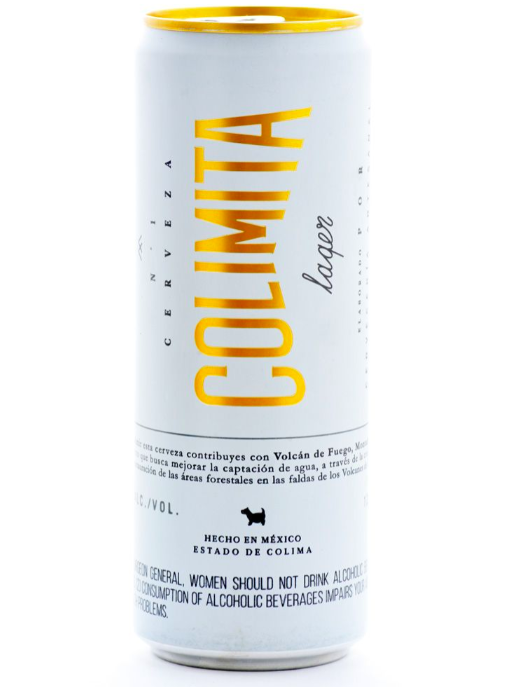 Colima's original and flagship brew, Colimita, is also their most awarded at this point, having taken Gold at the Cerveza Mexico competition for the last four years, as well as Gold at the 2019 Copa Cervezas de America. This pilsner presents a radiant pale golden hue topped by a sprightly cap of white foam. On the nose, look for a classic central European lager aroma with prominent noble hops conjuring floral and spice notes, grass and hay-like tones, and a dash of lemon, all overtop a clean base of crackery pils malt. This brew shines well on the palate, too, delivering excellent balance and true-to-style flavor. The malt plays out with satisfying cracker and fresh bread impressions while those hops add plenty of spicy-floral and grassy-herbal character. There's a perceptible touch of residual malt sweetness which is countered nicely by a mild to moderate, drying, hop bitterness. For pairing options, the brewery recommends regional dishes from Colima including aguachiles, ceviches, dry pozole, octopus toast, soups, and sweet enchiladas. Of course, pizzas, sandwiches, burgers, and fried chicken are all great options too. ¡Salud!

Situated on the Pacific coast a few hundred miles west of Mexico City lies the small state of Colima. The geography varies from stark volcanic landscapes to sandy beaches, and contains vast palm forests inhabited by tropical birds. The capital, also called Colima, is located in the shadow of a prominent and sometimes dangerous volcano – also called Colima – which sits astride the border with the state of Jalisco. It is here that three friends, Jorge, Andrés, and Esteban, dreamt of building a brewery to celebrate their love for the region and their passion for beer. With the help of over five dozen investors, the trio were able to get their dream off the ground, beginning work on the project in October 2013. The brewery is situated within an old soft drink plant in the El Trapiche neighborhood, and features a 30-barrel system along with a much smaller pilot system for experimentation. Despite numerous setbacks, including two Pacific hurricanes, the brewery opened for business in August of 2014.

In addition to the brewery itself, Cerveceria de Colima operates multiple locations where thirsty locals can grab a beer and some traditional food. Most notable is Jardin Trapiche, a beer garden located at the brewery featuring a dozen taps and local food, which hosts numerous concerts and events including Oktoberfiesta. Sign us up! Currently the brewery employs over 75 people and brews five year-round beers including pale ale, porter, tropical lager, session IPA, and their flagship Colimita lager. Additionally, they produce a wide array of seasonal, limited-production, and collaboration beers including double IPA, barleywine, dunkel bock, Baltic porter, gose, and many others. It's emblematic of the craft beer revolution that's been quickly gaining steam south of the border, and we're excited to see what comes out of Cerveceria de Colima, and the rest of Mexico, in the coming months and years. For more info, visit their Spanish language website at cerveceriadecolima.com.

Save this product for later